by Terry Pratchett, adapted for the stage by Irana Brown
at Davenies School July 26th – 29th 2018

​There is a Royal Wedding planned, but All is not well in the fantastical chalk and iron-laced grounds of Lancre. Stirrings of a magical nature are rumbling mischievously with evil intent, leading to an inevitable exciting and truly powerful magical showdown between good and evil.

Witches and Queens. The trousers of time. Elves and…iron.

New young upstart witch Diamanda and her small (but adequate for purposes) coven (Amanita and Perdita) are knowingly doing things they shouldn’t up at the ancient Standing Stones. Known as ‘The Dancers’, these Stones are a magical doorway for the Elves, who, being glamorous and eager for power, come when called, and Diamanda is stupid enough to call them, lured by Elf power and…Glamour.

The Queen of the Elves will stop at nothing to claim the land of humans for her own, but she never counted on the power of Granny Weatherwax and her coven – Nanny and Magrat – fighting back.

With a cast of larger-than-life wizards, witches, yokels, rude mechanicals, elves, trolls, a dwarf, orangutan (not a monkey!) and Oberonesque King of the Fairies; With a Royal Wedding, live band and quirky folk songs and an exciting talent-filled collaboration between Beaconsfield Theatre Group and The Young Theatre – this show promises to be a visual summer feast of funny and fun Discworldian entertainment not to be missed!

Will Magrat become the Queen she always wanted to be or will the Queen of the Elves defeat them all and defy centuries of folklore, folk songs and storytelling happy endings? Come and join us for a funny, family fuelled Midsummer’s Evening of magical Sir Terry Pratchett (May-he-rest-in-peace) penned entertainment – and find out!

The Young Theatre joins Beaconsfield Theatre Group in this great play, to be performed in the open air at Davenies School
​
PROFITS TO THE ALZHEIMERS SOCIETY AND YOUNG MINDS 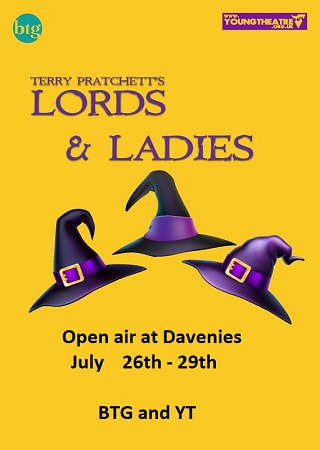